The hidden dangers of Asbestos in your home or workplace

Asbestos was used in the construction of homes and commercial buildings extensively in the past. In fact, because it is now banned, it is likely that you may not give it a second thought anymore. However, you may find that your office or home still contains this dangerous material.

It is easy to assume that asbestos was something used in old homes and buildings, and therefore you have no risk of being exposed. Unfortunately, if your home was built before 1999, then you may have asbestos somewhere in the building. Indeed, it is believed that some 1.5 million buildings in the UK still contain asbestos somewhere.

If you are planning to renovate your home, there are many things to consider, and one you may not have thought about is asbestos exposure. 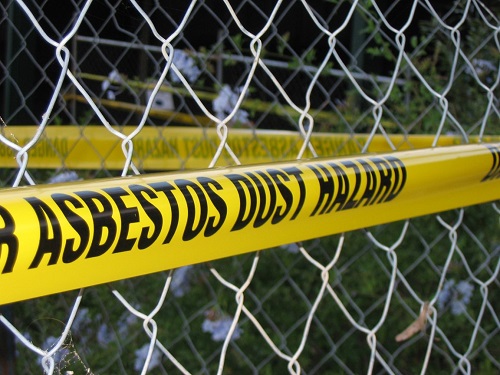 Why was asbestos used in the past?

Back in the 1950s and 70s, asbestos was believed to be a wonderful product. It was used extensively in the construction of homes, schools, hospitals, offices, factories, and indeed, any type of building.

It was used due to its many beneficial properties for construction. These included some of the following:


It could be used to help fire-proof a building and was mixed into cement to help insulate homes, make them more fire-resistant, and increase the strength of concrete.

How was asbestos used before?

When making a home design for wellbeing and sustainability today, you would consider the materials that you use. Individuals, and tradesmen, are far more aware of the health hazards posed by certain materials, and also the effect they may have on the environment. Just a few decades ago, things were different and there was less awareness and concern for these matters.

Asbestos was used for a huge amount of purposes, many of them quite alarming as they are still lurking in homes and commercial buildings.

Some of the ways that asbestos was used are listed below:

...and of course, in cement that makes up the walls of many structures in the UK

When does asbestos become dangerous?

Asbestos isn't necessarily dangerous if untouched and undamaged. For instance, a home may have wall cladding that includes asbestos and want it removed for safety reasons, but that may be unnecessary.

Asbestos becomes dangerous once it is damaged, and the fibres become free. The fibres in asbestos are so tiny that they cannot be seen and can travel through the air for up to 72 hours. Also, any disturbance in the air can pick them up and move them once again.

The minute size of asbestos dust particles and fibres is one of the reasons that they are so dangerous. They can be breathed in easily, and with every following breath, they work their way further into the tissue of the individual's lungs.

The inherent strength of asbestos, which once helped buildings become so strong, is also why it is so bad for anyone breathing it in. The human body simply cannot break down asbestos fibres due to their strength.

What are the health dangers of asbestos? 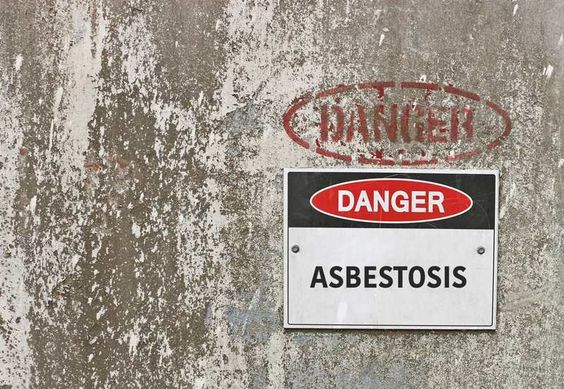 Asbestos is known as the hidden killer and became the focus of the Health and Safety Executive to try and help educate tradesmen on the danger of using it.

One problem with asbestos is that the health impact may not become obvious for years afterward. Breathing in asbestos causes a disease known as asbestosis, and pulmonary fibrosis, which has many physical symptoms including shortness of breath, and chest pains.

According to Healthline, the symptoms of asbestosis may not appear until around 20 years after initial exposure to the material. Once the disease starts to show, many symptoms can appear, and if untreated can lead to lung cancer and death.

Approximately 5,000 people die from asbestos-related diseases each year in the UK, many of these are, or were tradesmen, but anyone exposed to asbestos fibres at home or work is at risk.

How can you find out if you have asbestos?

The best way to find out if you have asbestos, and how much, is to have a survey done. An owner of a commercial building can have a fire and asbestos survey performed to check the safety of their construction.

Asbestos was partially banned in 1985, and fully banned in 1999, and came in different types. When a professional assessor visits a building they will identify which areas are likely to have asbestos in, and then test to see which types of material have been used.

The Control of Asbestos Regulations 2012 has a number of steps that commercial property owners must adhere to. Fully accredited and licensed assessors can help these owners and their tenants remain safe by preparing and implementing plans to reduce the risk of exposure to asbestos.

Failure to comply with these regulations, and to keep workers and tenants free from exposure, can lead to hefty penalties, and even prison time.

How can you remove asbestos? 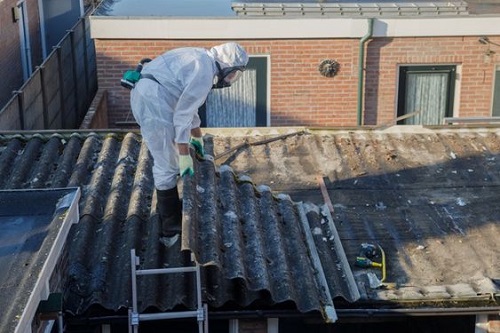 When you are carrying out your renovations at home or work, you may find that you have some asbestos. Sometimes this is highly visible, such as when it has been used for roofing on an old garage. Other times you will only discover asbestos once a survey has been carried out.

Once you are aware of the presence of asbestos, and if there is a risk of it being damaged and disturbed, you will want it removed. No one should try to remove asbestos themselves, and it must be left to professionals.

While it isn't illegal to remove asbestos from your property, it is highly advisable to locate a licensed and accredited firm to do it for you. Typically, professionals who remove and dispose of asbestos would be accredited by UKAS, or be licensed by ARCA, Asbestos Removal Contractors Association, and the HSE.

When looking for a professional firm to carry out an asbestos survey and perform testing, look for fire risk assessment firms that are UKAS accredited. 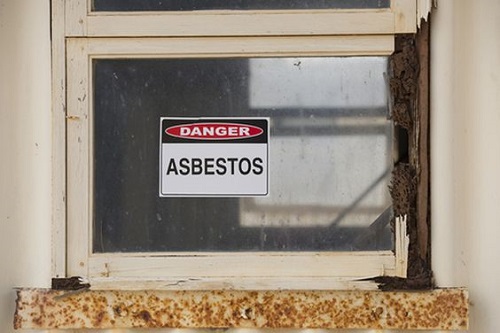 Most asbestos was outlawed in 1985, but white asbestos, or chrysotile, continued to be used until 1999 when the use of any form of asbestos was banned. However, this isn't to say that asbestos products weren't used in the 2000s.

Many products such as Artex, and other coatings, used asbestos. These products, along with tiles and the like, may have sat in warehouses and on shelves for years after the ban. It is possible that some asbestos was used in construction in the UK after 1999.

Many countries including China, Russia, and India, still mine vast quantities of asbestos each year. Some products using asbestos are likely exported to countries such as the UK every year.

While asbestos has been banned, there is still a chance that your home or workplace may contain one or more types of the mineral. If you are concerned about the dangers of exposure to asbestos then a professional survey will be able to determine whether your property contains any and the best way to control the risks.

Professional asbestos contractors can safely remove and dispose of the materials, leaving you safe to carry on renovating your property.

Can House Wow help you to stage your property or sell your house?

To find out more about how we could help you with property staging to sell your property complete the online enquiry form or check out our other home staging services.
Make an enquiry
Contact Us

Property Extensions and Construction Tools needed or why not check out House Wow's other home staging services?
Home Staging and Property Blogs
Colour Trends in 2021 Design for Wellbeing & Sustainability Using Staging & Photography for Faster Sales Staging Your Property for Rent Appeal Style Furnishing apartments HMO and Air BnB Styling a Holiday Home Costs of Central Heating Failures and no Boiler Cover Why Coronavirus has led to a requirement for storage The hidden danger of asbestos in home or workplace Kerb Appeal to your Property How Parquet Flooring Boosts Home Value Tips For Scheduling An Extension Project Is Your Home Clean Enough, or is it a Health Hazard?
Selling Property in 2021 How Home Staging sold this house in 1 week Holiday Lets - maximise your Investment Will home staging help to sell my house? Home Styling and Airbnb Declutter Tips 8 Tips for choosing the right blinds Recently Moved? 3 things to check before settling in 7 ways to enhance your property's buying appeal Outstanding ways to give your lobby a makeover The Definitive Guide To Building Your Own Home: What You Need To Know Are Solar Lights a Practical Option for Gardens What are the pros and cons of using renewable energy in your home
How Home Staging resulted in 9 offers to buy Selling a Lifestyle not just a House Why Stage a Property for Sale? Creating a Decorative Garden Low maintenance Garden ideas on a Budget Property Extensions and Construction Tools needed Home Improvement tips and topics Things that make your home more valuable What Do the Different Parts of a Home Insurance Quotation Actually Mean? How to make your home universally appealing before you sell it Roof Staging - 3 Things Homeowners Should Know 5 Hotel Bedding Trends You Can Replicate At Home
Home Staging and Show Home Services in Counties of the UK
Bedfordshire | Berkshire | Birmingham | Bristol | Buckinghamshire | Cambridgeshire | Cheshire | Cumbria | Cornwall | Derbyshire | Devon | Dorset | Durham | East Midlands | East Sussex | Essex | Gloucestershire | Greater Manchester | Hampshire | Hertfordshire | Kent | Lancashire | Leeds | Leicestershire | Lincolnshire | London | Norfolk | Northamptonshire | Northumberland | North Yorkshire | Nottinghamshire | Oxfordshire | Scotland | Shropshire | Somerset | Staffordshire | South Yorkshire | Suffolk | Surrey | Tyne and Wear | West Midlands | West Sussex | Wiltshire | Yorkshire |